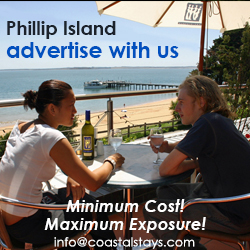 Renowned for amazing wildlife including the world famous Little Penguins (every night of the year at dusk at Summerland beach) koalas, seals and over 200 species of birdlife the island is truly unique. 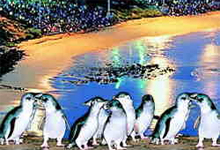 For thousands of year Little Penguins have been emerging from the ocean at dusk and waddling to their burrow homes in the sand dunes. It is a nightly ritual that people come from all over the world to see. The elevated boardwalks and stands are specially designed to protect the Penguins while giving visitors a close view. 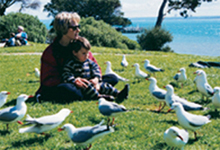 On Phillip Island, Silver Gulls also known as Sea Gulls nest from August to December. Males in the colony establish a small territory and are then joined by a female, usually the mate from the previous year. Nests are built on the ground so they can spot any predators approaching. Between 2-4 olive blotched eggs are laid and both partners share nesting duties. The eggs take 21-27 days to hatch. Take a walk along the Nobbies boardwalk at the Seal Rocks Sea Life Centre and see the gulls in their natural habitat. 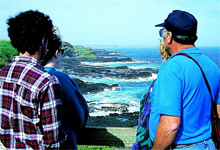 Point Grant, Pyramid Point and Cape Woolamai are three prominent basalt and granite headlands which, because of their composition, have withstood the destructive forces of erosion. Point Grant lost its identity, over the years becoming known as one of the Nobbies, which are two rock formations extending into the sea. 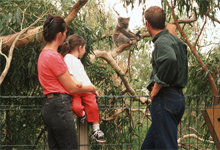 One of Australia's most famous and unique native animals is the koala. Koalas are marsupials, that is the young are born in a very immature state, and are nutured in a pouch. The scientific name Phascolarctos Cinereus means "pouched bear" and "ash-grey", however koalas do not belong to the family of bears. 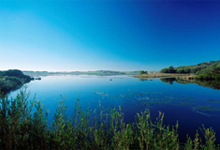 Situated on the North Eastern Point of Phillip Island Rhyll was originally named 'Flagstaff' by John David McHaffie who with his brother William leased the whole of Phillip Island as a stock run from 1842 to 1868. The history of Rhyll goes back to 1798, when Bass discovered Western Port and anchored off Rhyll for 10 days whilst making repairs to his boat. 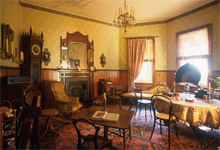 "I scarcely know a place I would sooner call mine than this little island", wrote Lt James Grant reporting on his visit to the 57 hectare tongue of land separated from Phillip Island by a narrow strait shallow enough to wade across the low tide. The year was 1801 and he named the island Churchill Island after an English gentleman who supplied Grant's Australia bound survey ship, the Lady Nelson with a variety of seeds and vegetables for "the future benefit of our fellow men, be they countrymen, Europeans or Savages". 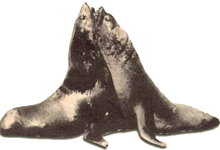 One of the major attractions of Phillip Island is the colony of seals to be observed at Seal Rocks located near the South West extreme of the island. Close contact can be made with the seals by visiting the Seal Rocks Sea Life Centre at the Nobbies or a Seal Rocks cruise aboard Bay Connections which departs from the Cowes jetty check at Rotunda for timetable. 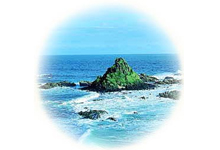 What a lot of people do not know is that the Penguin Parade is just one of the many natural experiences that Phillip Island can offer. Phillip Island is situated in Westernport at the bottom of Victoria, and provides natural habitat for a wide variety of land and sea animals. 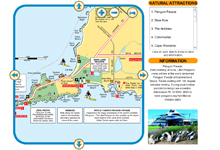 Click the link below to all the Phillip Island Natural Attractions in a handy interactive map.