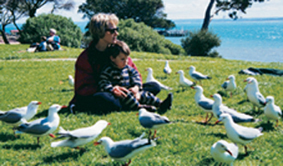 Belong to the world-wide group of Gulls, Terns and Skuas (family Laridae) of which there are 96 species, 26 of these are found in Australia.

On Phillip Island, Silver Gulls (also known as Sea Gulls) nest from August to December. Males in the colony establish a small territory and are then joined by a female, usually the mate from the previous year. Nests are built on the ground so they can spot any predators approaching. Between 2-4 olive blotched eggs are laid and both partners share nesting duties. The eggs take 21-27 days to hatch.

Take a walk along the Nobbies boardwalk at the Seal Rocks Sea Life Centre and see the gulls in their natural habitat.

Silver Gulls are scavengers and consequently their diet varies with locality. When at sea they feed on plankton and small fish and scavenge behind fishing boats. They mass along the foreshore feeding on crustaceans and other invertebrates. Many feed inland on insects, larvar, worms and berries when in season. They congregate at rubbish tips, beaches and parks to scavenge food scraps from humans. Silver Gulls will also feed on the eggs of other birds.

Please do not make your diet theirs. Don't feed them !!!