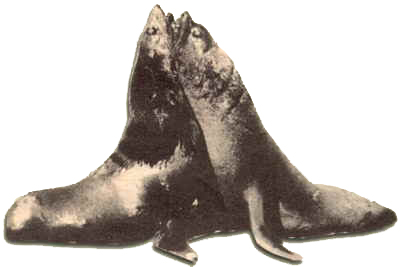 One of the major attractions of Phillip Island is the colony of seals to be observed at Seal Rocks located near the South West extreme of the island.

Close contact can be made with the seals by visiting the Seal Rocks Sea Life Centre at the Nobbies or a Seal Rocks cruise aboard Bay Connections which departs from the Cowes jetty check at Rotunda for timetable.

The Phillip Island seal, Artocephalus Doriferus have ears and are sometimes called Australian Fur Seals and Sea Bears they differ from the true seal which has no external ears. They are equipped with teeth, necessary for gripping fish and slippery marine growth, and their rapid swimming and skilful diving enables them to evade their natural enemy the sharks.

Although seals frequent Seal Rocks throughout the year, larger numbers come onto the rocks for breeding in November and December.

When the bulls arrive they are exceedingly fat, and it is just as well as they are likely to stay on the rocks guarding their domain for weeks without food. As soon as the bull decides on his position he will fight to the bitter end to maintain it.

As the cows arrive he selects as many as will succumb to his wiles and will give battle to any rival who attempts to lure any away.
If the old man leaves home there will be another head there when he returns, and if he puts up a fight to regain his position of head man the whole colony turns on him.

The young bucks have to take a back seat until they are matured, and they do not commence to breed until 3 years of age.

During the breeding season the roaring of the old bucks may be heard over a kilometre off, high above the thunder of the surf.

The cow gives birth to one pup, (occasionally two) in November, and they spend their early days sleeping and drinking, after which the sucklings begin to flop about. When a couple of months old, the mothers take them to shallow pools and teach them to swim.

Sealers used to bag them at the start of the season when 5 to 10 gallons of oil would result, against as low as 1 gallon at the at the end of the season, depending of course on the size of the bull.

There is reliable evidence that around 1870 less than 100 seals remained on Seal Rocks and probably the same conditions prevailed at all colonies along the coast. Strict protection in Victoria, however, has brought their numbers back to what they might have been before sealers took their toll.