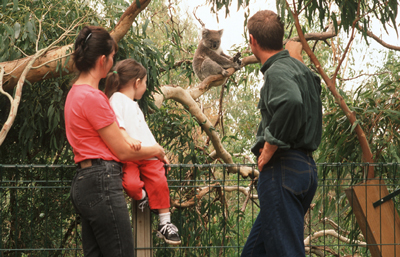 One of Australia's most famous and unique native animals is the koala. Koalas are marsupials, that is the young are born in a very immature state, and are nutured in a pouch. The scientific name Phascolarctos Cinereus means "pouched bear" and "ash-grey", however koalas do not belong to the family of bears.

Among living animals, koalas have a distant link only with wombats, both having backward opening pouches.

Most marsupials, including kangaroos and possums, have a pouch opening to the front.
Koalas are well adapted to life in the trees. Unlike other tree living marsupials such as possums, they fo not have a tail nor do they shelter in hollows or nests.

For climbing they rely on the strength of the fore and hind limbs, and have paws specialised for grasping. Two fingers on the front paw are opposed to the other three, forming a powerful clamp. Both front and hind paws have rough pads and long sharp claws to assist in gripping.

Koalas have thick wooly fur which insulates them from extremes in weather, high in the branches of trees.

A diet of leaves provides most of their food and water requirements.
Koalas browse approximately 50 species of Eucalyptus and several other tree species.

Two long pointed, lower front teeth, biting against six upper incisors are used by koalas for snipping off foliage, then their large molars with ridged crowns, grind leaves into a fine consistency.

Leaves contain a large amount of fibre which is difficult to digest, so like some other plant eating animals, koalas have a highly developed fibre digesting organ called a caecum which contains millions of microbs which break down the fibre.

Koalas generally produce only one offspring during the annual breeding season from early spring to mid summer.

After a gestation period of approximately 35 days, a blind, hairless cub, about 20cm long and weighing no more than half a gram is born. Unaided by the mother it crawls to the pouch using only its forelimbs.Once inside it attaches itself firmly to one of the two teats, where it remains and continues to develop.

After about 6 months the young koala periodically vacates the pouch. By 7 months it is too large for the pouch and rides on its mothers back. This close association lasts for another 5 months, when eventually the young kaola is forced to become independent.