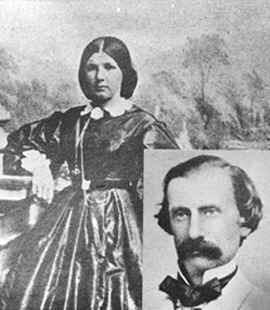 William James McHaffie came to Australia aboard the "Palmyra". His younger brother James, died on the voyage out, probably of typhus. William arrived in Melbourne on November 23rd 1839, he then sent to Canada for John David McHaffie to join him, which he did some time later.

The brothers established a station at Moonee Ponds, as it was then known and by February 1843 were preparing to move to Phillip Island, having arranged a licence covering the whole of the island for 10 pounds a year, this was for 24,320 acres. If that seemed rather generous remember that Phillip Island was hard to reach, had an uncertain water supply, and was not considered to be very good land. The brothers were virtually the first settlers, though there were several settlers on the island when they arrived. To start clearing sections of the island they simply set fire to it. The fire lasted for many days and could be clearly seen well out to sea. William soon tired of the life on Phillip Island and returned to Scotland (he returned at a later date for a holiday), John stayed on and in 1861 some 20 years after first obtaining the island married Georgiana Jemima White Henderson, a daughter of a captain in the Royal Navy. She was a lady of considerable grace and agility who came to Victoria as a governess in 1852. Georgiana was the perfect settlers wife who kept a diary of daily life from 1862 to 1883 which is still the best source of information on the hard and bitter lives led by the first settlers.

In the dairies she always referred to her husband as Mr McHaffie or the Master. (The diaries are currently in the hands of a relative of the McHaffies). The book of Phillip Island said of her:- She nursed her family and members of the staff through various epidemics, cared for cases of accident, was an efficient housekeeper, pianist and keen gardener, baked bread for the station, made large quanities of jam, could set up a cask of home made sherry, was a dressmaker, and apparently thought nothing of riding 12 miles to the Eastern Passage for the mail.