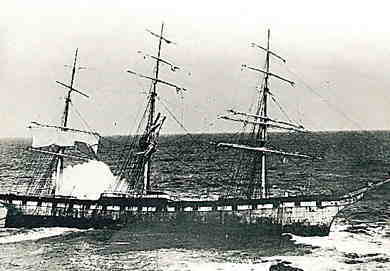 Phillip Island's most famous ship wreck occurred on November 8th 1905 when the S.S. Speke crashed onto rocks near Kitty Miller Bay on the southern coastline.

Launched in 1891, the Speke was one of the largest three masted steel sailing ships ever built, with main yards reaching almost 32 metres and crew accommodation for more than 25 amidships. She had two commanders before Captain Tilston took charge of her at Los Angeles in 1904 and sailed her to Newcastle, where she loaded coal bound for Peru. She then returned to Australia and off Sydney Heads received orders to proceed to Geelong to load wheat. Sailing south, she battled head winds for 12 days before arriving off the Victorian coast, where Captain Tilston mistook the Cape Schanck light for the one on Split Point and set a course which immediately endangered her as winds and high seas forced her towards the rocky southern coast of Phillip Island. Realising the danger, the crew attempted to "wear" her but when she refused to answer, both anchors were let go and the lifeboats readied. One anchor parted almost immediately, the other dragged and she drifted broadside onto a reef in Kitty Miller Bay, where she was swept from stern to stern by raging surf.

The starboard lifeboat containing four men capsized, drowning one of the occupants; the others eventually struggled ashore exhausted. Heavy seas battered the wreck for several days until its back broke littering the rocky shore with wreckage. Today, a small portion of the steel vessel remains as a constant reminder of the number of early strandings and wrecks along the Victorian coastline.