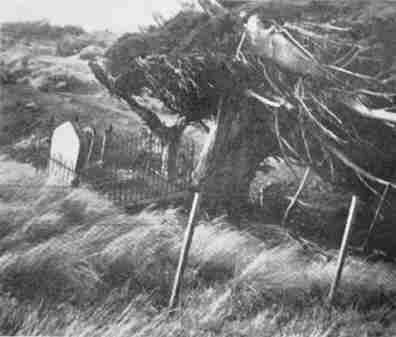 A tragedy occurred at the McHaffie home in 1868. When a friend of John McHaffie, Captain Grossard, was accidentally shot when a fellow guest on the verandah of the homestead mishandled a gun during preparations for a hunt.

Captain Grossard's dying wish was that he should be buried on a cliff near the sea. His lonely grave is still to be seen at the end of Grossard Point Road.

This inscription appears on the headstone: "Sacred to the memory of William Phillip Grossard, formerly of Bideford, Devonshire, many years captain in the Merchant Service, who was killed by accidental discharge of a gun during a visit to Phillip Island, the 17th December, 1868.