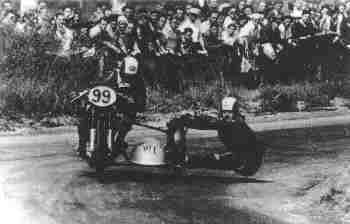 The first race meeting was to be held on March 26th 1928, however heavy rain began to fall the night before making racing impossible so the meeting was postponed for a week when a huge crowd attended.

The circuit was approximately 20 kilometres starting south of Cowes and running west to Ventnor and "Heaven" corner (a right angle), next south for a mile to "Hell" corner and due east about 6.5 kilometres, then north-east to just behind Rhyll and west again to the starting point. The track was rough with endless dust. Back in 1928 a large crowd gathered (they arrived mainly by ferry from Stony Point on the Peninsula) to watch the cars. The smallest being 750cc, the largest 2000cc very small engines by todays standards.

Following the event, organisers were delighted with the result and another meeting was organised for 1929. However, the Police Department informed the Council that it was illegal to hold motor races on a public highway. The Police decided to waive this law provided the council acted with common sense. The law was changed in 1930 by which time there was also motorcycle races being conducted on the island. The Australian Tourist Trophy for motorbikes was run each year through the 1930's.