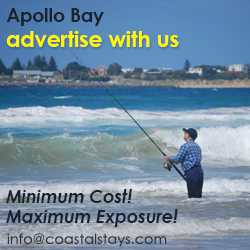 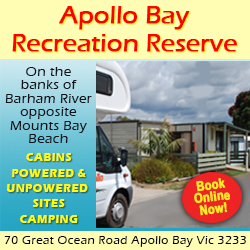 Some of the best parks on the coast are found at Apollo Bay, several offer accommodation with ocean or river views such as Apollo Bay Recreation Reserve, on the other side of town, plenty of space for the kids, fish in the Barnham River or stroll across the road to the open ocean. Pieces, has elevated cabins with views of Apollo Bay you won’t believe. Marengo on the Lavers Hill side offers a selection of beachside accommodation. Apollo Bay Top Tourist Park is a short stroll to the beach and is the closest park to the town centre with all the facilities you would expect from a park in a resort such as Apollo Bay.

Bimbipark Accommodation & Horse Riding
Cape Otway Apollo Bay VIC 3232
Bimbi Park is in Cape Otway, the centre of the Great Ocean Road and the Great Ocean Walk, an area of magnificent forests, beaches, secluded bays and spectacular coastline,. It is sheltered among tall manna gums far away from the wearing noise of towns and traffic. In the local Aboriginal language, 'bimbi' means 'a place of many birds' and the park's bushland is alive with bird song.
Pitch a tent, powered sites, cabins, dorm rooms, deluxe cabins.
Contact 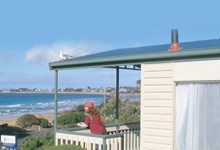 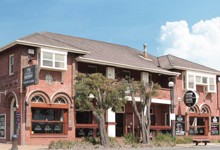